THE GREAT SYNAGOGUE OF BUDAPEST

THE GREAT SYNAGOGUE OF BUDAPEST

The Great Synagogue of Budapest c. English translation of the book in Hungarian.

The Dohany Street Synagogue is the largest Jewish temple in Europe and the largest in the 20th century in the world. The place of worship of a Jew raised before the 20th century. Built between 1854 and 1859, designed by Ludwig Förster, Vienna’s then chief architect. The church with three thousand seats had a decisive influence in the 19th century. century synagogue architecture. Its significance is not only due to its size. This building marks the most spectacular cultural breakthrough of Ashkenazi Jewry five years before the synagogue on Berlin’s Oranienburgerstrasse. It is also significant from an architectural history point of view, as it is the first truly representative synagogue that displays Oriental style on a facade defining a cityscape. Oriental style and the accompanying pioneering light structure of the XX. It leads to Vienna’s Art Nouveau, which preceded modernity in the 20th century. The Dohany Street Synagogue, together with the Rumbach Street Synagogue of Otto Wagner, is a work defining the architectural history of the Austro-Hungarian Monarchy.

Not only does the book present the building in a spectacular, understandable and professional way, it also reveals its message, makes it “readable” and places it in the open history of modern architecture. The volume, illustrated by the author’s own photographs, is an enjoyable read, while making the reader almost imperceptibly comprehend the presence of the building and thus of the Jews. The album-like look, the colorful, big pictures and the gilded cover make the book a gift too. 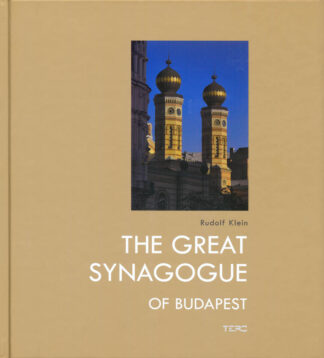