A Guide to the Girona Jewry is the first popularisation to inform us of Girona´s Jewish community over a period of more than five centuries, at the same time as bringing us on a sort of historical route through the maze of narrow, hilly streets that make up this important Jewwish district, bringing the reader into contac with it on a journey of permanent discovery.

The book is rounded off with various illustrations marking the most important places and material remains, as well as a general bibliographyfor those who would like to go deeper into Jewish Girona´s history.

For a period of over five hundred years, the City of Girona had one of the wealthiest and most important Jewish communities of the old Crown of Aragon. Reaching a population somewhere in the region of one thousand souls, it had legal and administrative status as the “Aljama”. It occupied the area between the modern cathedral, C. de la Força C. d’en Miquel Oliva, Travessia d’en Lluís Batlle and C. de la Claveria, where Girona’s Jews marked out a defined area, called the ‘call’ or Jewry, from which they carried on their economic, cultural and religious activities.

We suggest a historical itinerary through this warren of narrow, hilly streets, in the hope that this book will accompany you on your personal discovery of the district, and awaken your interest in a significant part of the city’s history. Of course, apart from the details of a historical nature that are given throughout the book, the actual lay­out and state of conservation of the old Jewish quarter means that when you enter this myriad of alley-ways you can be certain that at every turn some detail, however small, makes your visit a personal experience full of discoveries.

In the background, the Bonastruc ça Porta Centre, set in C. de Sant Llorenç, in olden times Carreró de la Sinagoga, and the centre of the Jewish district, forms a definite reference point. The fact that these premises – which long ago housed the synagogue and other offices of Girona’s Aljama – now contain the lnstitut Nahmànides – a memorial to this universal Gironan citizen – as well as the Catalan Jewish History Museum increases the cultural content of the visit and deepens our understanding of this city’s Jewish heritage. Above all, this book hopes to make the history of the Jews in Girona available to a nonspecialist audience, updating it with findings made in recent years by many researchers from all over the country.

Ramon Alberch i Fugueras (Girona, 1951), co-founder and president of the Catalan Archivist Association (1985-1993), is Head Archivist with Barcelona City Council and Director of the N.G.O. “Archivist without borders”. He has carried out research in the fields of Catalan archives and history. Where the Jews are concerned, he is co-author of the guidebook ” Els jueus a les terres gironines ” (The Jews in the Girona region; Girona, 1985) along with Narcís-Jordi Aragó, and has written for the collective works, ” Los judíos de la Corona de Aragón en los siglos XIV-XV ” (Valencia, 1989) and ” Cinq siècles de vie juive à Gérone ” (París, 1992).

by Anna Pagans i Gruartmoner

– THE JEWS IN THE GIRONA REGION

– THE ORIGINS OF THE JEWRY (CALL) AND ALJAMA OF GIRONA

– THE JEWRY, A WARREN OF STREETS

– THE JEWS, THE KING’S “TREASURE CHEST”

– THE POWER STRUCTURE OF THE JEWRY

– RIOTS AGAINST THE JEWRY

– THE GIRONA JEWRY IN THE 15TH CENTURY

– THE MUSEUM OF HISTORY OF THE JEWS 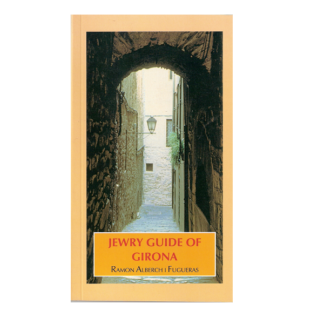